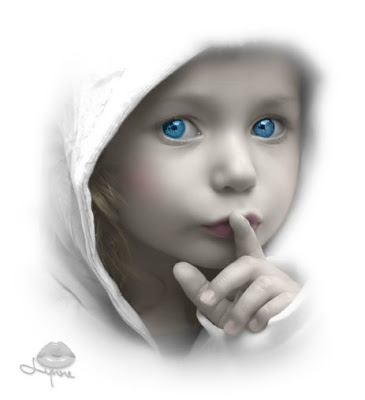 Often when challenged about why the secrecy law is in place, the explanation from Australian Family Courts is to protect children’s privacy. Australian Law, based upon English law often mirrors UK in legal matters. Naturally, Australian law mimicking UK law, will also mimic the adverse legal avenue where the Council of Europe found UK law to err on the side of bias when they ordered secrecy. UK was found to maintain secrecy, not to protect the children’s identity, but to protect the evidence where they violated human rights from the public. This led to media reporting on UK Family Court proceeding including the revelation that a mother wasordered by the court to return to UK where she was murdered by her ex husband whom had made previous threats to kill.

Australian journalists have even spoken out on how the Australian Family Court has stopped journalists from reporting on cases even where children are dead:

Today Tonight producer stated that he had received jail threats over reporting cases where all members where anonymized.

So why do we see media reports on the family court?

In the case of Darcey Freeman, the reporting was so viral that it was reported in the UK and in US, which stretched out of the Family Courts jurisdiction and made such a lawsuit very expensive and ambiguous. Since the release of the above video, other journalists have been able to make anonymized reports on family violence cases without needing to seek the courts permission.

Beforehand, only stories that supported mens groups ideology where provided and reports that involved family violence were required to obtain permission from the courts. In fact three media reporters from three Australian leading newspapers who provided reports from the mens groups ideology where in fact mens rights advocates. It is therefore no wonder why the community attitudes on violence against women and children provided poor results. The belief that women raise violence in the family court to obtain custody is widely held:

Half of all respondents (49 percent)

believed that ‘women going through

custody battles often make up or

violence in order to improve their

case’, and only 28 percent disagreed. – page 8, Changing Attitudes Changing Cultures A National Survey on Community Attitudes to Violence against Women

It is a mystery as to why such a document is able to identify the members and explicit details of a family court case: 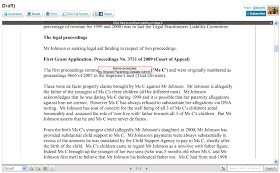 It is a mystery as to why the details of the mother were revealed on the fathers facebook profile page whom has 672 friends with access to all of the court files that compliment his version of events. 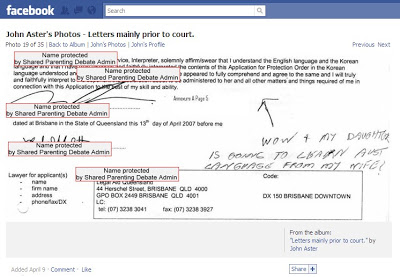 He also identifies the child by providing the photos and the case information underneath. 672 friends can clearly identify the mother and the child, know who judged the case and the details of the case he believes supports his reason for custody. Where he is not identified, he proceeds to identify himself in the case:

It is also important to note that John appeals for his case as an injustice because(according to his account) he had not viewed child pornography for nine years:

The question remains unanswered to the public as to the other remaining years and what police reports was he referring to that he claimed to be untrue?

Then there are the abduction cases where the family court has a high number of fathers looking for mothers whom have absconded with the children. Research has noted that a high number of abduction cases are due to escaping domestic violence and the negligence of protection related to that area. Most abduction cases therefore produce a mens group style promotion, neglecting to add the part where child abuse was raised and not dealt properly dealt with. An excellent example is the case of Melinda Stratton and Ken Thompson. In the court orderedpublication it warned anyone who recognized Melinda Stratton, “not to approach her as she might prove a danger to herself or her son”. Unlike other family court releases, it did not specify a criminal or diagnosed mental health history. An aspect that would clearly be important to add when compelling the public to turn a mother and child into the police. It was later revealed that Melinda had run because of her concerns for Andrew Thompson and the courts inability to investigate child abuse. The court of course restrained the Australian from publishing most of the mothers accounts including the allegations that were made.