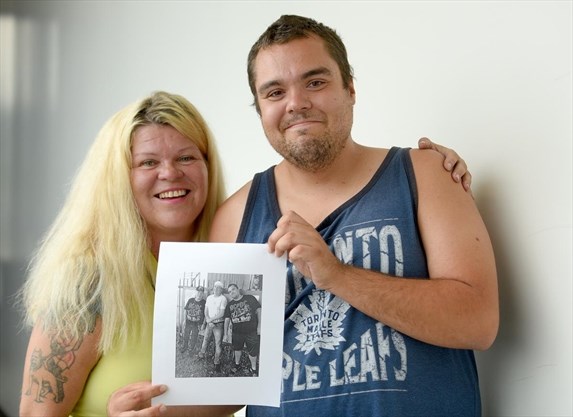 Thomas Larabee and his mom, Francine, hold the first photo ever taken of his whole family, shot on Wednesday.

It was just a coincidence, but Thomas Larabee and his mother Francine arrived in Hamilton on Father’s Day. Three months ago.

They’ve resettled here from Sudbury. Francine lived here for several years in the 1980s. It’s where Thomas, who turned 30 in April, was conceived.

And it was just a coincidence that Karl Poirier, with his girlfriend, was getting on a Hamilton city bus one day in August just as Thomas and Francine were getting off the same bus at the side door.

Karl is Thomas’ father. At the last second, they saw him at the front and recognized him — Francine from personal experience, Thomas from the pictures he’d seen.

So they stepped back on the bus, and Karl, on his way to the rear of the bus, walked right past them.

Francine said, “Hey, Karl, Karl with a K!” And then she used his nickname, “Hey, Beaker.”

That’s how it happened. The first time Karl and Thomas, father and son, had ever met. Thirty years.

“He (Karl) seemed in total shock when he realized who we were,” says Thomas, remembering the moment with a smile. A few stops later, they all got off the bus together.

For five days, Thomas has run an ad in The Spectator’s Classified section (see today’s), with two photos of him and his father in Gage Park, Karl with a guitar.

The headline over the pictures said: “CAN YOU BELIEVE IT? SON MEETS FATHER FOR THE FIRST TIME AT AGE 30!!!”

The caption told how on Aug. 24 Thomas and Karl had a day in Gage Park. That had been arranged after they’d met on the bus.

I met Thomas and Francine and they told the story. Francine had moved to Hamilton from hometown Timmins in the 1980s. Life hadn’t been easy for her, neither had Hamilton, and she spent time in a group home.

She and Thomas stayed there for about nine years, then they moved to Sudbury, and from the age of nine to his “age-ing out” at 18, Thomas was in foster homes.

“It was bad,” he says, “but it could’ve been worse. He would still see his mom but in time, after he’d reached 18, he moved to Toronto and spent 10 years there, some of them on the streets.

Two years ago, he returned to Sudbury to live with Francine.

This year, says Thomas, they decided, “Let’s start a new life. We could go back to Timmins but that wasn’t “new.” They chose Hamilton.

Thomas realized he might see the father he’d never met. He’d talked to Karl on the phone, twice, at age 10 and 15. He’d also seen pictures. When he was 15, he got a letter, with a gold chain and the promise of a visit. The visit never came.

When they knew they were coming to Hamilton, Francine got reacquainted with an old Hamilton friend and she knew that Karl, who’s on disability, was still in the city. She got Karl’s phone number for Francine, so they would’ve eventually met. The bus was a case of fate speeding things along.

“I always wanted to meet him,” says Thomas. “I got scared because once I saw an obituary for a (different) Karl Poirier.” It ramped up the urgency.

Thomas and Karl have met a few times now. No coincidence. This weekend they’re all going out for Chinese.

“It’s going well,” says Thomas. “I’m glad he’s doing the right thing. Deep down he’s a good guy but has trouble with commitment. Nobody’s perfect. I accept who he is. We’re taking it a day at a time.”

Thomas, for all he’s been through, radiates this gentle good nature. You can feel his mother’s pride. He loves Hamilton so far and would like to go back to school and ultimately work helping the homeless.

And the classified ads? “People told me I might never find my dad,” he says. “But I wanted to let the whole world know I did. This is my trophy.”