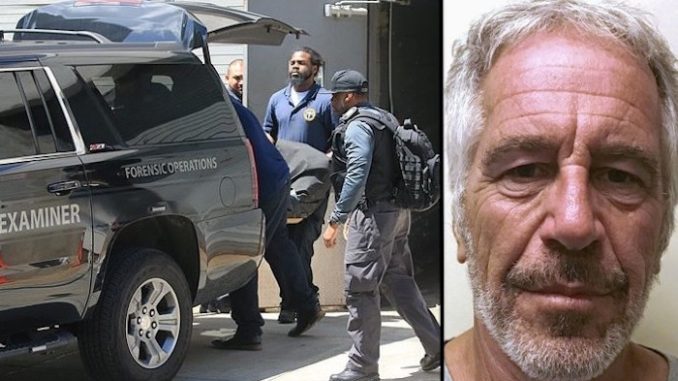 The autopsy of notorious pedophile Jeffrey Epstein shows several broken bones in his neck that are more common in homicide victims who are strangled to death, according to forensics experts.

The Washington Post reported late Wednesday that among Epstein’s broken bones was his hyoid, a horseshoe-shaped bone located near the Adam’s apple in men. Forensic experts told the Post that hyoid breaks are plausible in hanging cases but are more common in cases involving strangling.

Law enforcement received a call Saturday at 6:39 a.m. that Epstein was in cardiac arrest in his Metropolitan Correctional Center cell and was later pronounced dead at New York-Presbyterian Lower Manhattan Hospital.

Under the jail’s protocol, Epstein would not have been given a bedsheet had he been on suicide watch, the Associated Press said.

New York City’s chief medical examiner Dr. Barbara Sampson said the autopsy on Epstein was performed on Sunday and stated she would release the determination upon “further information.”

The Post further reports Sampson’s office has requested information regarding the condition of Epstein prior to his death, possible video surveillance footage of him in his cell, and the results of a toxicology test.

Epstein’s death angered federal and local officials, prompting the immediate launch of an investigation into the prison’s personnel and practices. Attorney General William Barr directed the Department of Justice’s inspector general to probe the matter. The FBI has also opened a full inquiry.

“I was appalled, and indeed, the whole department was, and frankly, angry to learn of the MCC’s failure to adequately secure this prisoner,” Barr said on Monday. “We are now learning of serious irregularities at this facility that are deeply concerning and demand a thorough investigation. The FBI and the Office of Inspector General are doing just that.”

“Let me assure you this case will continue on against anyone who was complicit with Epstein. Any co-conspirators should not rest easy. The victims deserve justice and they will get it,” the nation’s chief legal officer added.

The guards on Epstein’s unit the night of his apparent suicide were working overtime shifts to make up for staffing shortages, according to several report. One of the guards, who had a different job in the jail and did not regularly perform correctional officer duties, was working a fifth straight day of overtime and the other guard was working mandatory overtime. The prison’s warden, Lamine N’Diaye, and the two guards have been reassigned.

Epstein was facing charges of sex trafficking that stemmed from activities over a period of three years in the early 2000s. He served a 13-month prison sentence in Florida in 2008 after he was charged with similar offenses and was forced to register as a sex offender. His attorneys unsuccessfully lobbied for bail and house arrest on the new charges, but a federal New York judge declared him a flight risk and a danger to the community.

Federal prosecutors in New York are pursuing a parallel investigation into whether any of his associates will face charges for assisting him in what authorities say was his rampant sexual abuse of girls as young as 14.