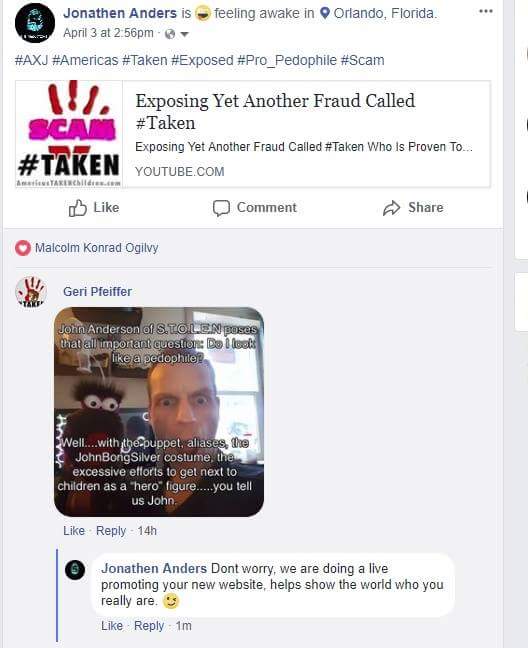 As you can clearly see with this sideways screen shot, that #Americas_Taken_Children founder #Geraldine_Phifer is comitting criminal defamation towards an innocent actor who also exposed scams and pedophiles.

Actor John Hans Anderson exposed Americas Taken Children as a full out scam created by a convicted child abuser and drug addict. Using the creation to reap donations to support her drug habit and pay others to bully and troll hundreds of innocent people.

To set the record straight and expose this sick and repulsive woman we obtained John Hans Anderson’s full criminal record.  Both youth as well as all adult convictions are listed. This article just proves the fake and fraud advocate Geraldine is someone who should not be in possession of ANY non profit organization period.

John Anderson, Katherine Anderson, Denise Anderson, are currently at the police station making a formal police report as well as updating the FBI.

Actor John Anderson exposed pedo John Aster and his connections to Geraldine, Mark and even Francesca Banfield of the scam #Punished4Protecting.

The following is proof John Hans Anderson has NO convictions relating to sexual abuse and NO domestic violence convictions. Yet Geraldine Phifer is convicted for child abuse.

The following pic below is just a small sample of what has been exposed with these so called claimed advocates proven to be criminals and strongly connected to convicted pedophiles.

Mark W Mumma is the owner of Webguy.com and is sure to be a company well worth avoiding at any and all cost. Unless you like being scammed.